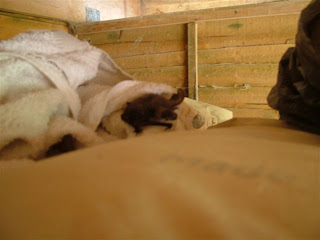 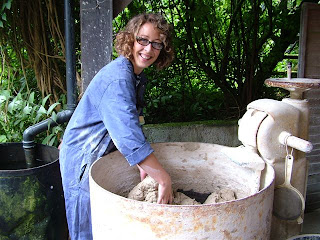 As one firing is over we must think of the next as is the way with potting, Nicola (who is working with us this summer) and I started making the clay for this months pots this morning but after a few mixes we noticed a large and rather handsome frog walking or should I say jumping by on his way to the pond, as Nicola was watching him she pointed at what looked to me very much like a bunch of leaves and said, "Isn't that a bat?" I stopped the dough mixer and pulled one of the large bins back to get a better look and sure enough it was a very frightened bat with long ears! I am not positive but I think it's what they call a lesser horse shoe bat and it was not very happy where it was so I got a clean towel and gathered it up carefully placing it on the top of one of the stacks of clay bags, some 10 ft off the ground and far enough away from the noise we where making so as not to be too disturbed from its sleep, I had a look at 11pm and it had gone so hopefully it is none the worse for its fall from either the roof or one of the clay bins.
Posted by Alan from Argyll Pottery at 15:36