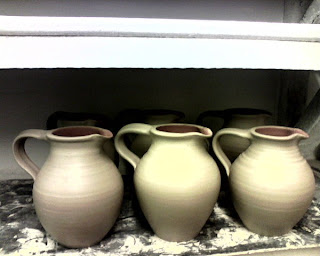 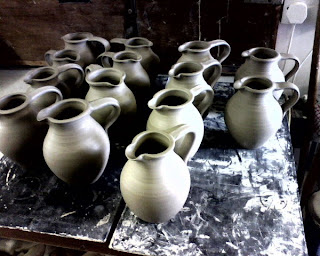 I have always found it hard to try to give pointers to people about their work as I see so many faults with my own pieces but it is important to help with growing talent so today I had to choose which of Nicola's 1pt jugs that she had made over the last two weeks were in my eyes good enough to fire. (She had done many other jobs in that time but this was her throwing project for now.) I had made two jugs so that she would have something to aim for and to show the different stages of throwing turning (yes we turn our jugs) and handling. My ones are on the right of this photograph, the ones I chose are the four in the middle and the far left ones are the ones that went back in to the slops bin. (Just writing this is making me cringe again to see all that hard work ruined but it was great to see the improvement in her work).
Posted by Alan from Argyll Pottery at 16:38