I was making Flan Dishes amoung other stuff. (Handles etc)...See Pulled. 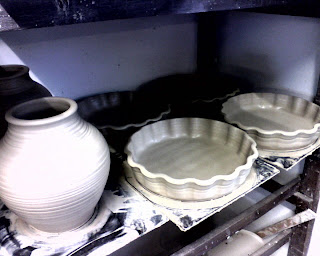 Nicola is making Penny Candle Sticks, they have nothing to do with costing a penny but are named after Penny the potter who invented them, they hold a candle obviously but you can also put flowers in the reservoir around the candle too. N'x also made some very nice Posy pots earlier, in spite of her cold getting her down quite a bit. (She's a very brave wee soldier, and if she reads this she will probably hit me for being a patronizing bampot.) 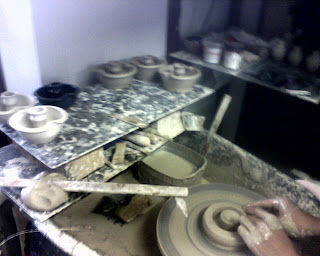 Hugh is making Wall Posy's and has just finished the Flower pots. He didn't like this photo much, said it made him look a wee bit bald. (Hugh I'm sorry old friend but probably because you've been pulling some out over the years what with all those kids of yours and the new house you've built recently, I must to tell you something about your hair.....) 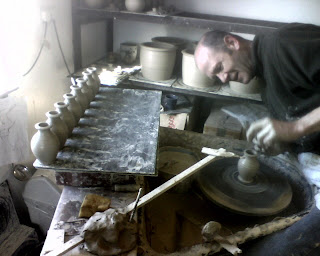 Posted by Alan from Argyll Pottery at 16:33