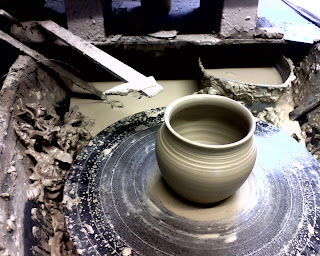 We use a pointer to give us the height and diameter of any domestic pots we make, Round mugs are three & a half x three & a half inches and weigh ten ounces, they hold approximately half a pint when fired, (I know, we haven't gone metric and my wheel box is a mess- so?) 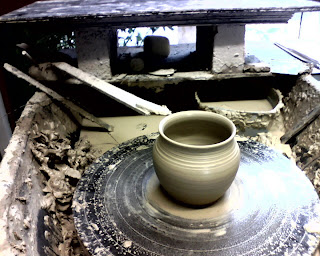 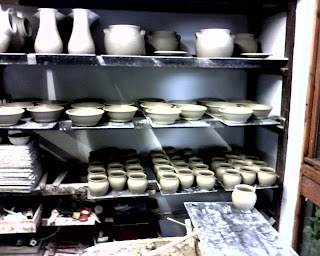 I was making mugs and GIO (that's Glazed inside Only) bowls today, Hugh and I cut wood for the kiln as well and a certain other person is back from T in the Park nearly in one piece, She's coming down with a lovely cold which I'm sure we will all get in the fullness of time, it's possible that Nicola caught the cold before she left from one of our visitors but I will try to keep her feeling guilty about it for as long as I can as she had such a good time there.
I think the mugs are probably the pots I make most of for any one firing, 46 will go in on one side of the kiln so 46 is what I usually make. In the past I made loads of bowls etc at a time but I have found that it's better for body and soul to not become a machine.
One other thing I would like to mention as a word of caution to would be blogger's out there, When I got back from Stirling yesterday (two sold but I had to collect the three pots that didn't from The Smiths Gallery) I popped in to the Doctors surgery for Pam's repeat prescription, Irene and Rebbecca two of our near neighbours were in there waiting by the desk, as I walked past Rebbecca said hello and giggled, I know I'm no oil painting but I don't usually get laughs for just being there so I did the usual and checked my flies, no that was OK and I don't remember saying anything particularly funny at the last pottery demo I did for the school, then she did it again and my only thought apart from her being a giggly teenager (which I didn't think she was) is that she might have read my "Grumpy" blog, I didn't know we had a younger audience but Hi there if we do! I might just have to take a wee bit more care in exactly what I say from now on though. (God forbid, I might say something rude, un' P,C, or embarrassing but then again knowing me I'll just go and do it anyway.)

Posted by Alan from Argyll Pottery at 16:03

I met some people at ClayArt in May who I'd not met before. They were looking at my pots and asked me how my knee was. I was a little confused but then they told me they read my blog! I tend to think of it as just a couple of other sad muppets like me reading it and forget that it does get out into the big wide world where normal people might actually read it! Scary isn't it.

PS unrelated but do you find your fireboxes are big enough? Hope that's not too personal. Do they get clogged at all?
Ta

Well I've never had any complaints! and only today one lady complimented me on the size of my chimney (it's 7 meters high!) But seriously I have holy shelves in the bottom of the fire boxes, as I'm sure Joe Finch's book will show, with the doors too I only have to clear the ash about once every 3 or 4 firings, (well Hugh does it actually), without doors you have a choking problem every half hour or so near the end of the firing from 1,000'C on and have to rake a lot but with doors just once or twice a firing, with holy shelves as well no bother at all even to 1,300'C. The shelves act as a grate keeping the wood from the bottom of the boxes and pushing super heated air in to the back, making the ashes boil and burn more efficiently.

P,S, The word "Clogged" has another meaning up here and I would like to point out that I have never Clogged (to pass out due to the partaking of too much alcoholic drink)in my life! I also know Hannah that you only love me for my kiln knowledge, as soon as you've had your first firing and it comes out great, you'll drop me like a worn out sponge, (it's OK Paul - only kidding).

Ho de ho, that's so not true you know I love you for your ceilidh dancing too.

I had the bruises to prove it!

Tell me about it! Potters have strong arms.