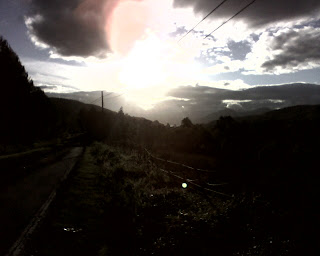 Went for a ride on the bike this evening, a bit breezy to say the least but very invigorating. That's Stalker Castle in the background in between the trees, though I don't think it's too clear, (Better known as Castle AAARGH! in Monty Python and the Holy Grail). Loved the sky though, it looks SO big some how on days like these. 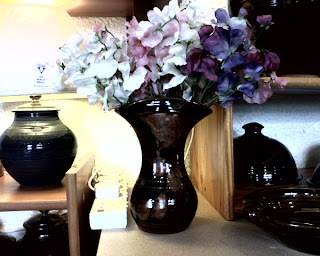 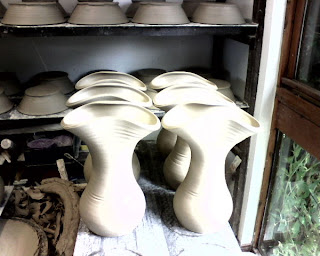 When I throw my Fan vases I sometimes glimpse people looking at me and my work as if I've gone slightly nuts. They see me make a perfectly good vase and then bash it in on two sides for no apparent reason what so ever? But if they have seen the fired version out in the show room it sometimes twigs in their heads. The idea was from Bob who owned a big country house hotel a little way north of here where all of the old mantle pieces are quite narrow but he wanted to do nice big flower arrangements, hence the Fan Vase as it splays the flowers in to the shape of a fan and there's a good reservoir at the bottom of the pot which keeps it stable too.
Posted by Alan from Argyll Pottery at 16:52