When it's not all Black & White.

It's quite easy to see where the four leaved clover is in this photograph but if you think about where this picture was taken, then it's not so clear. Hugh and Nicola say they have never found one growing but they both walk over this patch of grass at least ten times a week, I suppose I do the same thing with other more important stuff all the time. 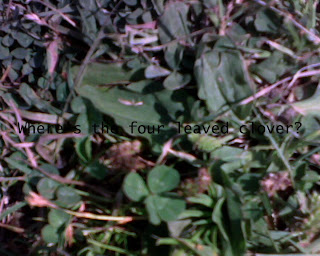 This is The Black Castle or it's sometimes known as Barcaldine Castle, funny really as it is neither Black nor in Barcaldine (it's in Benderloch just down the road) but then it's not really a Castle either but a Tower House, such is life in the West Highlands. 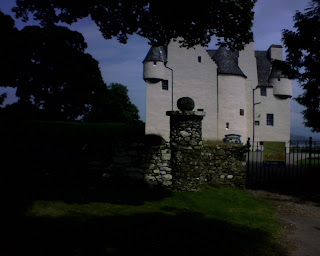 It's for sale if you are rich enough to afford it? 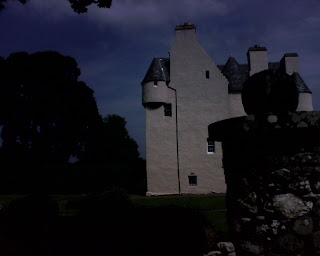 I decided to sort out the water lilies this morning as they were looking a bit sorry for themselves, and to say it was rather warm today would be understating it just a bit. I got roasted by a combination of the sun and reflection from the water. 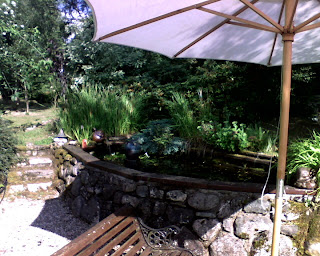 Hugh gave me a hand with the extra roots, three wheel barrow loads! 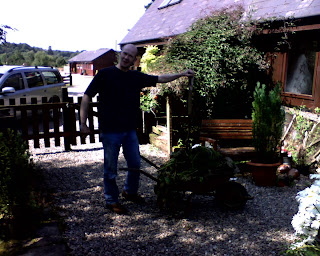 I don't expect any flowers this year but then they were not going to be very good anyway, this is one of seven pots we put back in re potted, ( I was doing potting of some sort so it's not skiving really). 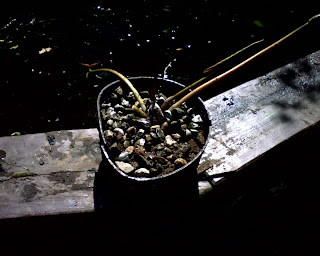 The poor fish won't know what's hit them, I haven't done this for about five or six years but then the lilies needed it they were getting too tall for themselves. 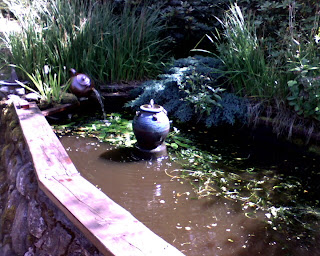 Just a bit cloudy this water, unlike a short while before. 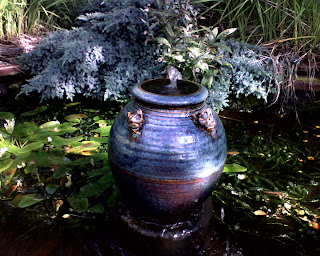 I saw this shadow at lunch time when I took the dogs and thought of Hannah's pictures (unlike her wonderful artistic shadow pictures though this one looks like I've become a toilet sign on a field of lavender! It's just grass though.) 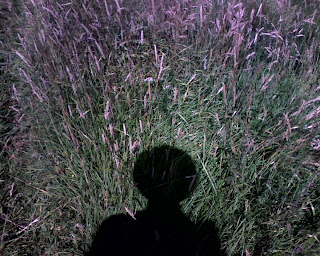 And I was just wearing a silly straw hat to keep off the worst of the sun. 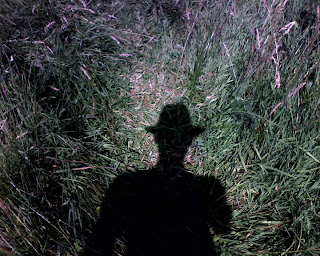 Went up to the start of Glen Coe this evening, a beautiful run on the bike, I went ostensibly to take a picture of "The Chancellor ", a formation of rocks that when viewed from the right angle makes up what looks like the face of a judge with his wig and gown. 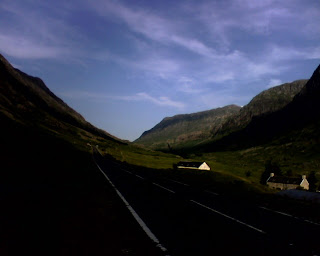 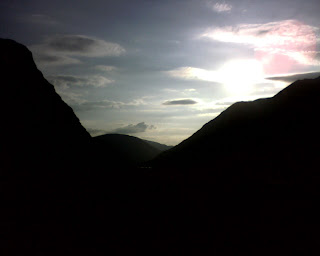 That's the way to the hidden glen (Where the McDonald clan allegedly used to hide stolen cattle). Hay! do you think that might be when they started selling all those beef burgers? 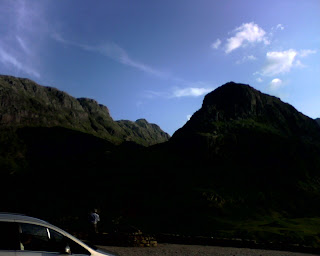 This is the mountain where the Chancellor is but I should have taken my proper camera not just the rubbish phone one. (No zoom). 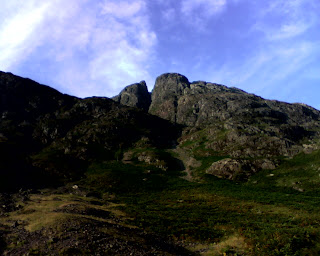 I think you might just be able to make him out in profile looking right from the left side of this photo, what? no you can't Oh dear I guess I will just have to take another trip up there some other time then. (See any excuse, previous blog.) 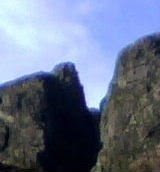 By the time I got back from my trip by way of the Creagan Inn (Haven't shown you the view from there yet) it was getting towards sun set. 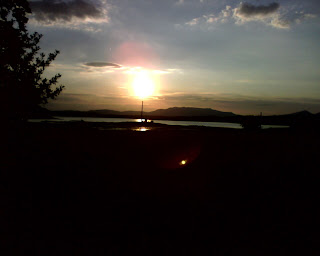 So when I went in to the Pottery showroom the light was pitching in straight at this Tenmoku (or as we call it) Black glazed lamp. Wow! it was anything but black and you could really see why I love this finish quite so much OK the picture doesn't do it justice but you might be able to get my drift? 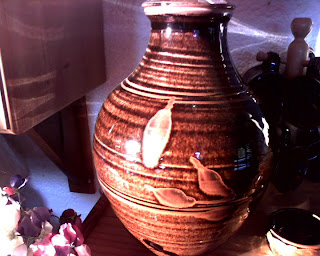 PS, We did do quite a lot of finishing work, mainly glazing but it's not very interesting to show you so that's all folks (for now.)


Posted by Alan from Argyll Pottery at 15:46

Alan, nice post. The 'tower house' is quite nice, looks a little too big for just me and Sarah so we'll pass on coming out to have a look. Thanks for sharing the pics.