I did get to take the dogs for a nice walk around Dalrannoch (Gaelic word for Blunt Point) which has made me feel a lot less grotty but I still would like Christy's head to go to someone that will appreciate it more than me. 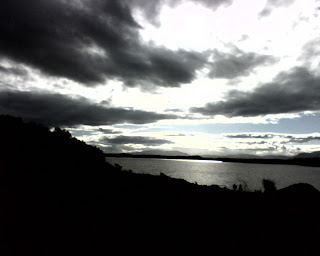 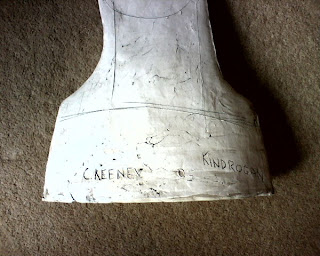 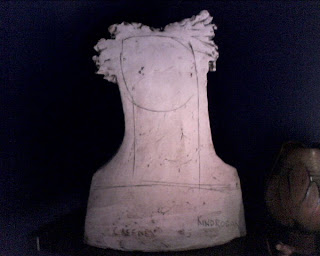 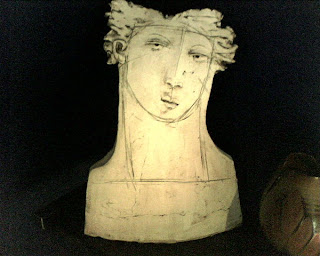 I think it's a combination of many things that have drawn me to the conclusion that I am becoming that which I most dread, a "grumpy old sod". The fact that Nicola (our summer student) is off at T in the Park (a music festival) this weekend so not only am I more than a bit jealous having seen some of the TV coverage but also unlike every other Saturday for a while I have had to look after the weekend crowd on my own without the help of that bright, keen, vivacious young woman that knows just how to smile sweetly at the difficult customer (She's worked in a pub a few times before coming here) may have something to do with it, I know that when Hugh (my full time assistant) is on, he hardly ever lets me look after customers because when the odd tourist has left his or her brain out of gear for the holidays I tend not to be terribly diplomatic. Don't get me wrong I know that 99.9% of people that come through our door are really great and appreciate the pots and I am eternally grateful for their support. We would not have survived for 20 years without them but it just takes the odd one or two to come in and they are the ones that you remember. Today (Saturday) was just one of those days when eight or nine decided to pay us a visit all at once. I know that I should not be too jaded so early in the season (we are open all year round) but when you've been asked for the third time "What's happened to all the water?" When the tide has gone out so the loch looks a bit empty (they really do think that there's been a drought, conversely that there has been a deluge when the tide is in!) and "Why is the terracotta faded on one side?" when you have a beautiful blush of wood ash on the other side of a stoneware wood fired pot, also there was the lady that asked if you could use the garlic pots for salt, to which I had to reply "Yes you could if they did not have holes all around and in the bottom of them", then there's the person that (and you know who you are) had to turn the big vase full of flowers (and therefor water) upside down and then exclaimed "Oh I didn't think there would be any water in it!" Looking at me accusingly as if I had somehow tricked her, I could go on but I must focus.
If you have read some of my previous blogs you will know that I lost my old computer and as I bought a new one I decided to get a wireless hub, this means I have moved things around in the room (where said hub is) the idea being that I will not fry my brains with radio waves while at my desk. This has caused quite a lot of upheaval but the main reason for my rambling on is I was fortunate enough to win a raffle prize at the A,G,M of the Scottish Potters Association in 2006 it was a Christy Keeney original and the only place I have been able to give it space is in this room. The problem is I do remember having quite a long conversation with Christy in the bar the previous year when he demonstrated and I remember his slide show where he said he drank away most of his time at The Royal College of Art. I also remember his exact words to me when at the end of the meeting I went to thank him for is teachings and my over all impression of him was and still is to this day that he is "A Grumpy Old Sod" so I am not too keen to have his head any more as it reminds me of what I do not want to become and was wondering if there might be anyone out there that might have something to swap with me? Like maybe a David Leach Cup and Saucer? or a Mick Casson Jug? A Michael Cardew Egg Cup? anything, even money might tempt me. I know I have not sold the idea too well but there must be quite a few C K fans out there or he would not make a living. My apology's Christy if I have offended you but I am sure that as you said yourself we should all speak our minds you will forgive me (or maybe not, he can be a bit grumpy you know).
Posted by Alan from Argyll Pottery at 16:13

Thanks Hannah, It's a sign of a true friend when someone stands by you when you're just howling at the moon.

PS, I do really think the book idea of yours is a goer as we have colected more than one or two comments that we've had over the years.