No I am not going to stop potting nor have I stopped using the spell check, I just got some new boots for the bike and I'm fascinated by the beautiful patterns they put on motorbike tyres these days. (This one seems to be saying Al, all around it so as it's short for Alan, I think it's meant for me). 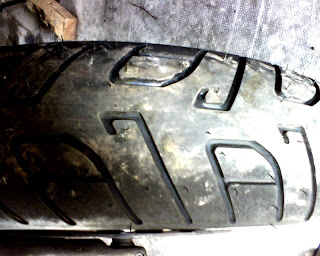 I still have the funny wee hairy bits on them where the molding has left points of rubber, I did ask Nx if I could borrow her Epilator (for plucking the hairs off your legs) but she'd have none of it. I wonder if Hugh would let me use his clippers? Perhaps not. Oh well I'll just have to go out on my bike again to scrub them off. (The back one looks like it's saying la, la, so either it's singing as we go along or it should have an Ooh! at the start.) 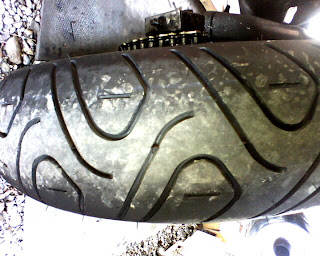 When it's as hot & humid as it was on Friday you have to think of a nice cool place to go for a walk, Sutherland's Grove. Big trees and water falls, I love the textures of the different bark from the trees up there. 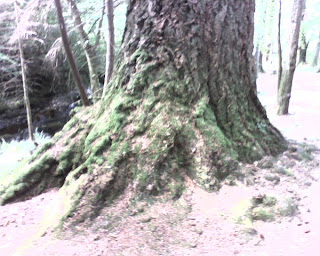 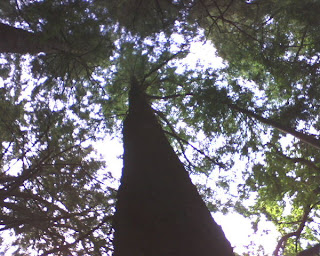 When I say waterfalls I had forgotten we haven't had much rain of late, it's a bit dry just now. 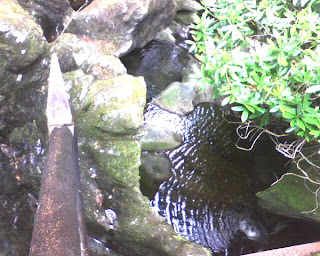 Aye I know it doesn't look very high and believe me I'm not frightened of shear drops it's just my brain seems to want to drag me over them so even though Nicola was fine, I was hanging on for grim death. 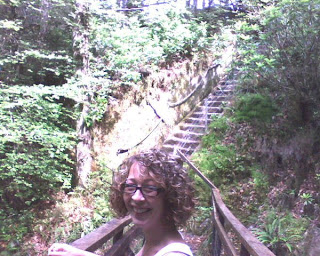 Back to some flat ground. 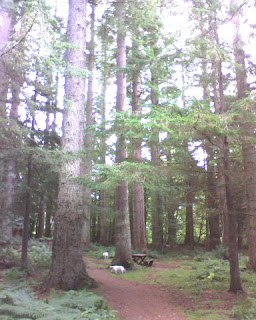 More textures, I feel a Jim Robison (from Holmfirth) moment coming on. 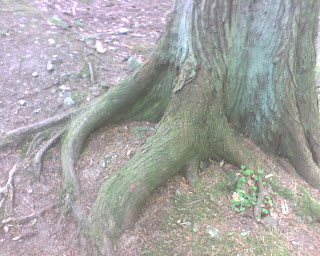 If you make Lemon Squeezers you must also do Sugar Shakers to complement them. (For pancakes,what do you mean? you don't know what I mean, Sugar & Lemon is best not Maple syrup, that's for our cousins across the ocean, besides how do you make a maple syrup bottle that would be practical from pottery?) 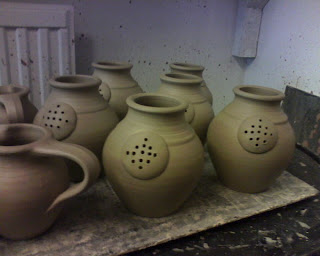 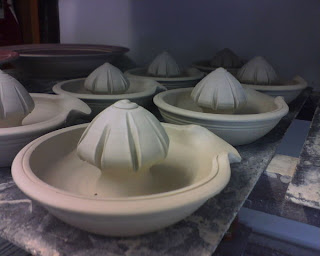 Beautiful day, just got stormy in the evening. 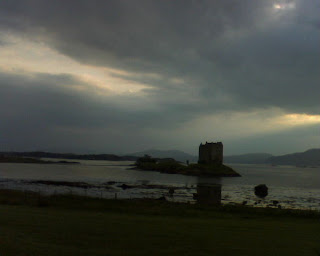 We have just about finished making for the next firing but there's a lot of waxing, glazing, hand painting and general fiddling about to do before we start packing so you might not hear much from me for a few days, see ya. P,S, We just sold the last really big jug so it looks like I will be on to them soon, watch this space in a few weeks time. (Firing comes first). P,P,S, I started this entry in the wee small hours so some how manged to hit the wrong button when I was reducing the size of my photo's, I have edited it now so the writing sort of nearly makes some sense now but I cannot do anything about the size or quality of these pictures. Many apology's - note to self go to sleep at night and do blogs when you wake up! ( I was also listening to some great stuff from T in the park through the BBC i player so may have been a bit distracted by the Chemical Brothers on my wee screen in the corner of my computer, I love the graphics show they do as well as their music, they are soooo! good).


Posted by Alan from Argyll Pottery at 17:34

Is that the last of them there jugs that are my fav? sitting here recovering with my leg up on a stool, think i've twisted my ankle. Durr.
Did you say you shut the firebox doors during firing? Is that to get reduction going?
sorry, interogation again.

By the way: The Manics, Amy MacDonald and Franz Ferdinand! That'll be good. Bit envious of that. (one of FF has some of my pots.)

I will either have to get the video I did of the last firing off to you or you will have to come and see us fire some time (I suppose for a small remuneration I could come down there and help set up and fire it?)

PPS, The jugs we are out of are what we call the tall or medieeval shaped ones not the round or as ironically Joe calls them my Pregnant jugs (to know what the irony is see Hannah's blogs about getting hold of pottery sponges).