Well I'm not sure what happened last night but the blog page just wouldn't play ball? It seems to be working fine now so here goes. This is the front stack, nice and even. 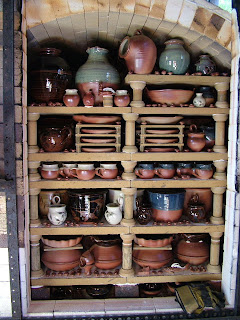 Back stack is possibly a wee bit too hot (one or two and I do mean just one or two over firing blots - that's a bubble in the clay for the non potters out there), I can see only one second because of this problem though at the moment so hardly a Major fault. 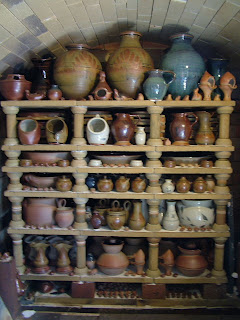 Here you can see the hanging bird feeders in front of the tall lamps and some one stick jugs (one stick of clay - about 8 lbs weight). 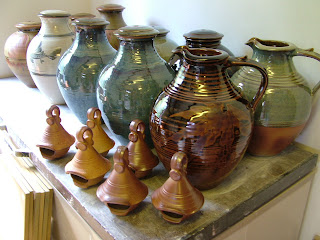 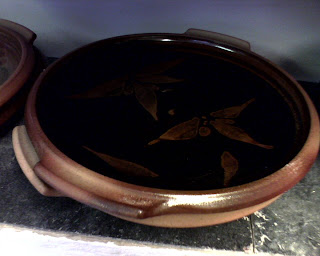 The Orton cones (we set them in a dragon or fish design so that we may sell them at the end of the firing) are fairly even apart from the back dragon which is kind of flat! 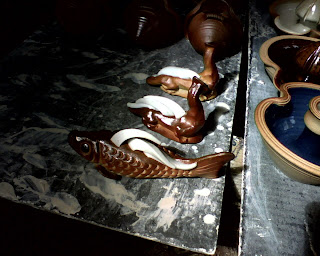 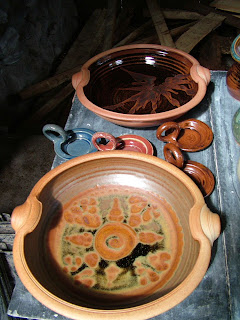 This tall vase of Hugh's in the white dolomite glaze has suffered from a rosy red bottom (cheeky) as the copper red has leeched over to it during the firing. 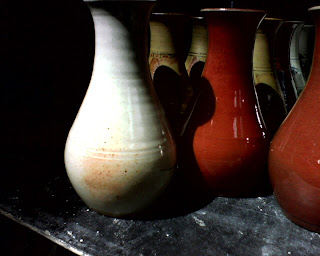 Some wall mounted bird feeders that I made the other week. 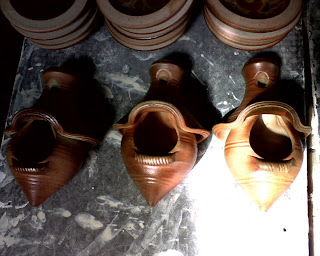 This is a picture of Nicola's rutile blue 1pt jug, very nice. 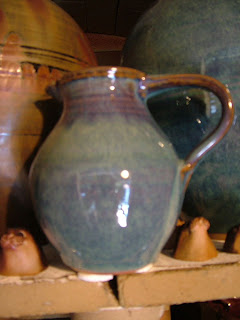 But she didn't stir the tenmoku up very well ( easy mistake to make if you haven't raw glazed before as it looks OK much like a bisc glaze when you give it a wee stir and too thick when it's done right if you get my drift), I'm sure she will get it right next time. 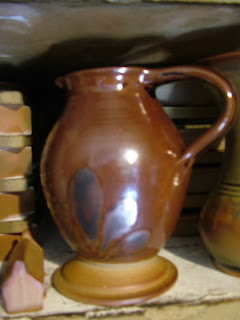 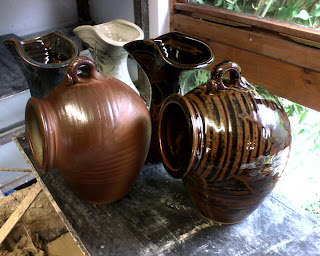 Only got one of the banks in this firing (I always think my kiln is bigger than it really is, it's better to have too many pots to pack than not enough don't you think?) 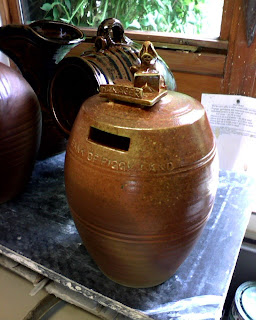 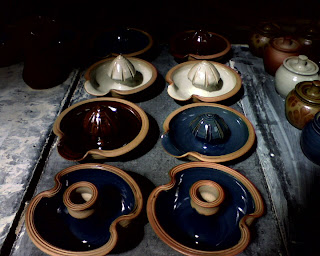 I only put two of the smaller wall platters in this firing as our clay is very tight (no grog) so I have to be sure that large ware is totally dry. (You can' really see the combing in this picture but it's there I'll try some more photo's later). 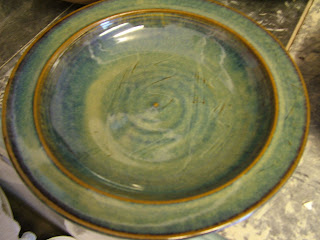 The Tenmoku one is a real shiner though! 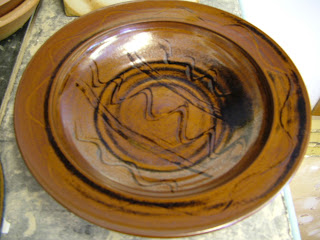 Over all a really good firing.


Posted by Alan from Argyll Pottery at 17:10

Tasty looking firing, well done. Love the jugs and that platter is a stunner, congratulations

the last pic is a jolly nice pot.

Thanks I'm very glad that you like my tenmoku platter. I was quite chuffed myself, apart from it could have been a bit more ashy round the back and maybe it could have had ...(Never satisfied).

Nice firing. I wonder what it would cost to ship a pot to the USA? Is it feasible? I was very attracted to the white dolomite vase with the pink blushing on the bottom. I have this issue with not liking most vases for some reason which is probably why I never make them, but that form is very appealing to me. Enjoying your blog-you guys sound like you have a lot of fun.

Very nice for sure Alan. What a huge load of pots.

Hi Deborah, yes we try not to take life too seriously (not all of the time anyway) and thanks for liking the vases, this pot would probably cost about £10 (that's roughly $20) to send unfortunately this vase is hand painted with the cobalt and iron decoration on the other side so you might not like it so much?

Hi Alan, thanks. You might be right about that only because I think I like the starkness of it in white although I'm sure the cobalt is very nice.

I love the plain white at times too but we have to think of our customers, I'll try to blog a photo or two of the vase tonight.

Thanks for putting those photos up Alan. It's very nice. I imagined an intense bright blue and this is very soft and earthy. Someday I'm going to order one of those vases from you guys. And I think two actually. One that size and one twice the size. Something to look forward to.